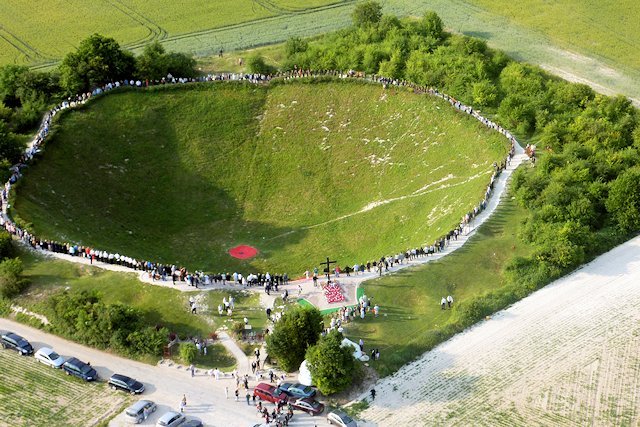 Having headed west to the Somme I was moved by the massive crater we found at La Boiselle (feature image courtesy of Georges Vandenbulke © 2011). A mine had been dug beneath German trenches and two chambers had been filled with tens of thousands of pounds explosives. The resulting explosion on the 1st July 1916 (in tandem with 13 other simultaneous detonations) constituted what was then the loudest man-made sound in history, and killed thousands of German troops.

The scanning of a small on-site QR code revealed that Cecil Lewis, then an officer in the Royal Flying Corps, witnessed the explosion from his aircraft high above La Boisselle. He was quoted as saying:

The whole earth heaved and flared, a tremendous and magnificent column rose up into the sky. There was an ear-splitting roar, drowning all the guns, flinging the machine sideways in the repercussing air. The earth column rose higher and higher to almost 4,000 feet.

Which as I explained to my son, rose 4 times the height of the Eiffel Tower!

We visited many cemeteries during our visit but none were more moving than Mont-Bernanchon British Cemetery. Here, my wife read out the last letter that her relative, Oliver Middleton, wrote to his mother 10 days before he was killed in action. Later in Belgium we visited the grave of medic Captain Noel Chavasse. His headstone is the only one in the world engraved with two Victoria Crosses – both awarded for the courage and self-sacrifice he displayed when saving scores of his fellow soldiers.

In Flanders Field was the pick of the museums. After collecting a poppy bracelet with our tickets and entering the museum you scan your poppy beside a computer and enter details about yourself. At four points during the experience you again scan the poppy to display a story on a screen that will relate to you in some way i.e. the person is your age, or from your part of the world.

All of these sites had personalised the experience, made it real, and brought home just how many lives were affected, and in so many ways.

Time has made it easier to tell this story. We are far enough removed from this awful chapter in history to learn how individuals were affected, physically and mentally. The places we visited weren’t gratuitous. They were real and stand as a monument to those who fell.

But whilst time is a healer it is vital that these sites get it right, as the Great War means so much to so many people.

These principles were also the guiding light for the Lofthouse Colliery Heritage Trail app we developed – although we had completed this project before I went to France and Belgium.

Here, time has also helped heal the scars of a mining disaster that made headline news in the 1970s and changed British mining dramatically. Whilst much of the colliery has now been reclaimed and put to a new use as a country park, memorials and other physical installations remind visitors about the past.

The aim of the app was to provide a personal angle. To share the experiences of that fateful day in March 1973, but also celebrate the camaraderie of the men underground – the Lofthouse Family – we wanted people to know what it was like before the bulldozers transformed the site.

Miners I have spoken to often use a similar analogy that mining is like being in a submarine – you are isolated group of people. If disaster strikes you are in it together and this creates a very close-knit community.

The app contains a mixture of poignant and humorous anecdotes that illustrate this bond – humour is a natural tool, a coping mechanism, to help deal with difficult situations. The app gives the visitor a chance to see inside the lives of ex-miners, hear their tales and view their photographs; and get an idea of where everything once stood on the site.

In total over 11 hours worth of interviews were recorded. We could have filled the app with much more audio, but felt the selection provided a good balance. Most of the clips are under 1 minute long but we felt some, such as those relating to the disaster, could be a bit longer.

Being able to listen to the first hand stories of these men, recorded forty years later, is very powerful even more so when you are standing at Lofthouse. The emotion in the interviewees voices is still there and this helps to paint a vivid picture in your mind, place you in their shoes, and in the case of the disaster start to understand just how awful a situation the rescuers faced.