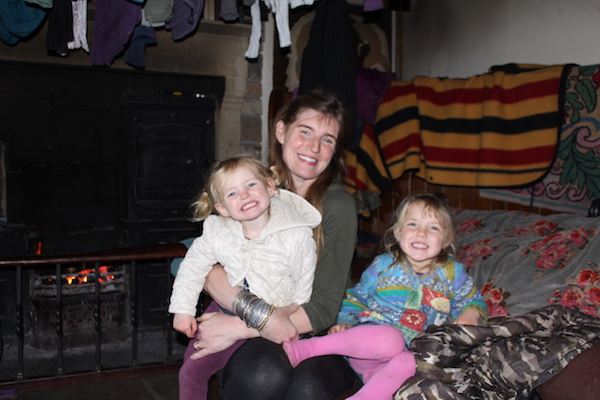 Amanda Owen, watched by millions on ITV’s The Dales (and more recently on Channel 5’s Our Yorkshire Farm), met me at the door with babe on hip and two young smiling toddlers in tow. She and her young family live a life that has almost gone in today’s modern world, a life ruled by her animals and the seasons. And indeed the name of the Owen’s farm, Ravenseat, has a Jane Eyre ring to it. It sits 1300 feet up in the moors, slightly nestled within the pillowy hills at the end of a remote road. Amanda’s 1000 sheep, 20 cows and nine children have free rein over its almost 2000+ unrestricted acres.

Amanda’s front room – which I later found out served as a rudimental ale house several centuries ago – was dark but very homely. Only the modern fabrics hanging on the massive laundry hanger above the open fire deceived the idea that we hadn’t stepped back at least a century. Even the individual black and white, almost sepia, portraits on the walls looked old, yet on closer inspection were of her children and husband.

Amanda comes across as the sort of person that isn’t easily fazed. In fact it was soon clear that she enjoyed the challenge of her life. I was served a lovely warm scone and a glass of peaty spring water in between the multi-tasking she was performing throughout the interview. You wouldn’t guess she was a first generation farmer, and perhaps that is one of her few regrets, but she is clearly putting that right for future generations. Her kids have a rare freedom.

At one point in the interview her gaze is casually diverted outside, “oh, the baby has just blown past the window.”

The interview itself was beautifully chaotic. In my younger days I may have been distracted by Amanda’s young girls giggling/squabbling, piano playing and mic stroking, plus the roof repairs and self-catering guests dropping in, but I loved it. External sounds on a recording can make editing clips for use in e.g. an audio trail tricky, but all these noises were a true reflection of Amanda’s hectic life.

At one point during the interview her gaze is casually diverted outside, “oh, the baby has just blown past the window.” The now sleeping baby had been carried along the drive by a small gust of wind. There was no panic, just a measured “sorry about this” as she stepped outside. And all the family have an inextricable link with the outdoors. All the children have accompanied their parents during their work day, strapped onto a back until they are big enough to walk.

Amanda likes the cold and wet no more than you and I but this girl from Huddersfield has an inspiring passion for farming and giving her kids this special way of life. And unlike many of the rural people I have interviewed for the Museum of Rural English Life’s ‘The countryside, why it matters for me’ project, it isn’t a car, mobile phone or computer that are her most important work items. No, for Amanda she picks three more rudimental objects: the humble penknife and bailer twine are vital. And of course the dog whistle saves having to put her hands into her mouth, which is not a good idea if you are poking, prodding and chasing sheep most of the day.

An hour passed in a flash. My window into the Owen’s world was so insightful, humbling and inspiring. As I drove away I felt a tinge of sadness that I was returning back to the complexities of the modern world.

Where next? Learn more about our oral history and audio trail work.

Dan was working as ‘Community Historian’ on behalf of the Museum of Rural England Life (MERL), based at the University of Reading, to create a temporary exhibition and permanent audio guide for the museum along the theme of ‘The Countryside. Why it matters to me.’