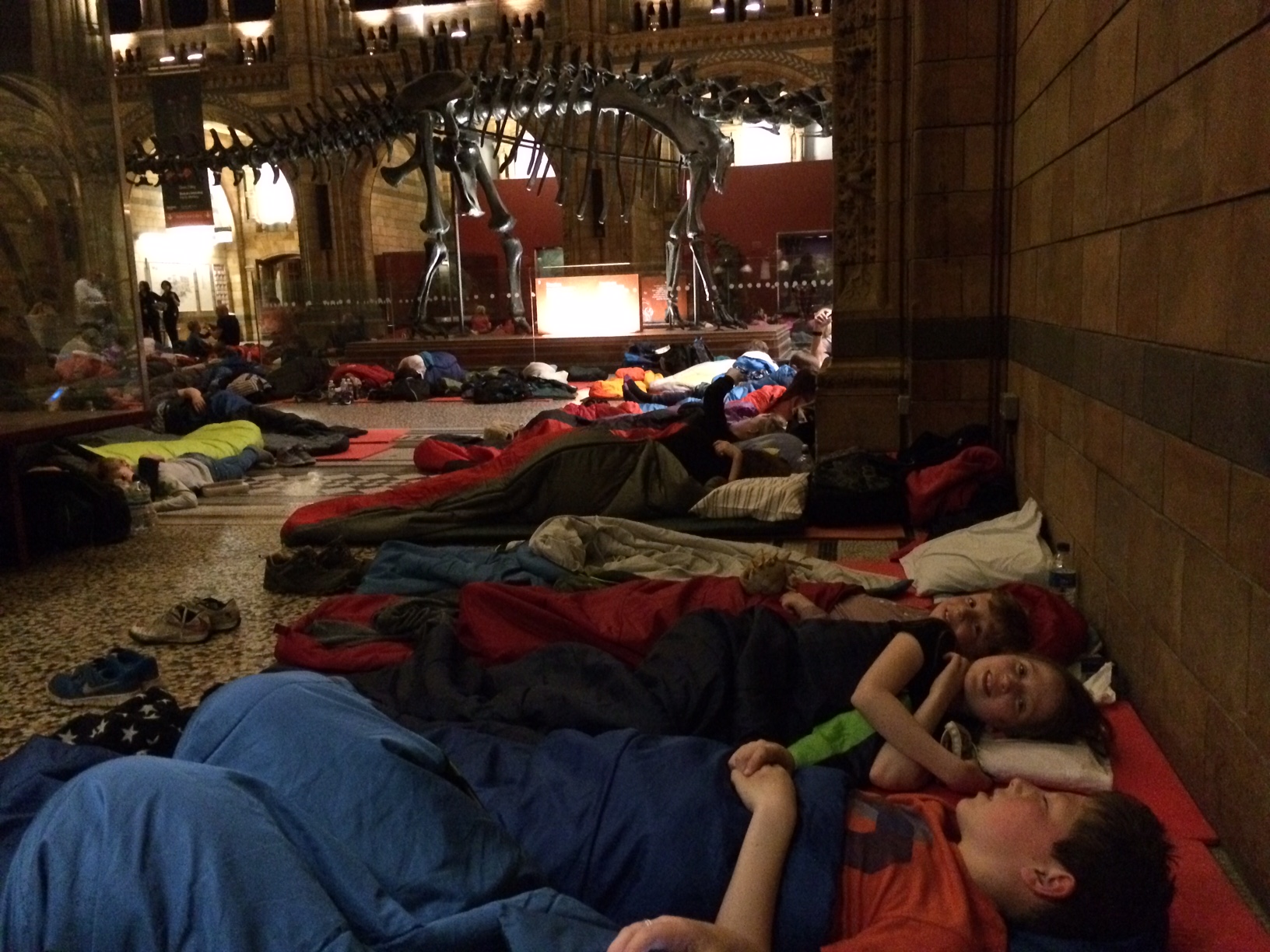 It’s not every night you get to sleep in the shadows of the Natural History Museum’s most famous resident.

Late on Saturday afternoon, armed with sleeping bags and snacks, we joined a growing queue of onesie-wearing kids (and their guardians) at a side entrance to the Natural History Museum (NHM). We were here for Dinosnores, a special sleepover event at the museum.

If you’ve ever watched the Night at the Museum film series then your curiosity will have no doubt been piqued by exactly what happens at museums when everyone goes home. We were here to find out.

Our Team Leader lead us into Hintze Hall, the central hall where the fossil replica of Dippy the diplodocus currently stands guard over the main entrance. As one of the first ‘Red Raptors’ to arrive, we were given the option to select any one of about 50 sleeping mats that had been laid out within special masking-taped zones.

In all the excitement we initially chose a spot right under Dippy’s head. But then we came to our senses and opted for one of the secluded side chambers – the first on the left as you enter the museum. We were to spend the night with a stuffed Bustard, some vacant wasps nests and a enormous Mammoth’s skull and tusks. We still had a wonderful view of Dippy, but it gave us a little bit of protection from those who took the Dino-‘snores’ name a bit too far. 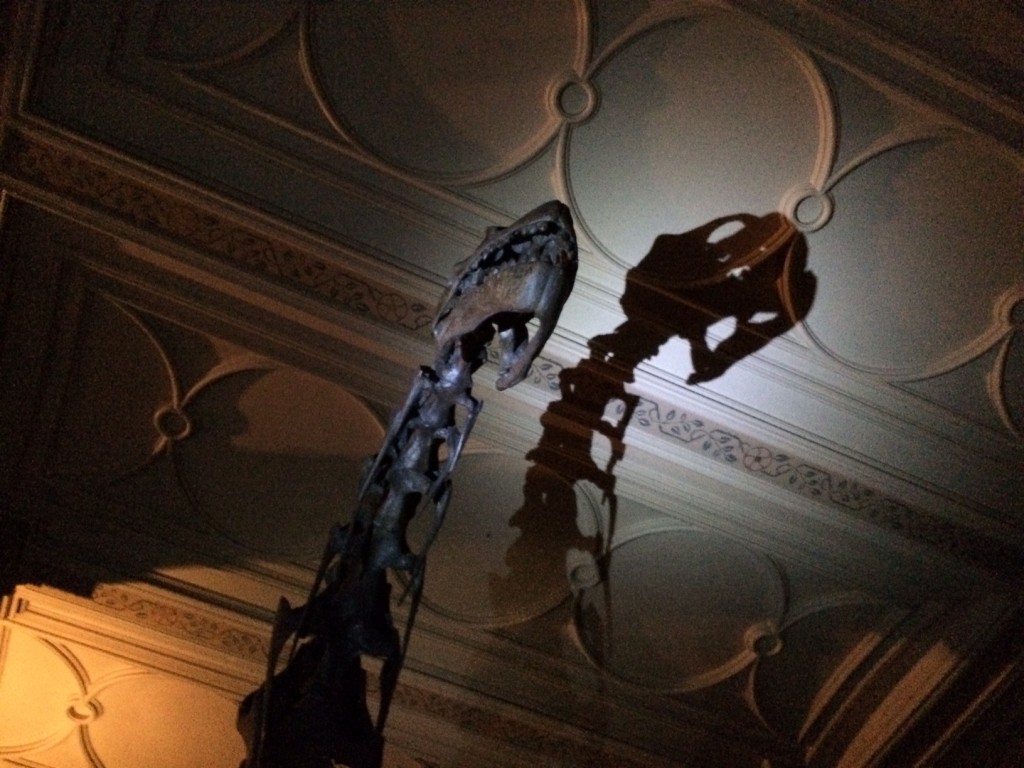 Having prepared our own nests for the night we were sent on the first of three after-hours activities. This was a torch-lit treasure hunt through the Dinosaur section.

A snack break was followed by a journey through space. Did you know that although water takes up two-thirds of the earth’s surface it only counts for 0.02% of its mass? Our resident scientist also made a comet. Dry ice and ice cubes, plus dirt, Worcester Sauce and Red Wine were all essential ingredients for this fun chemistry experiment. 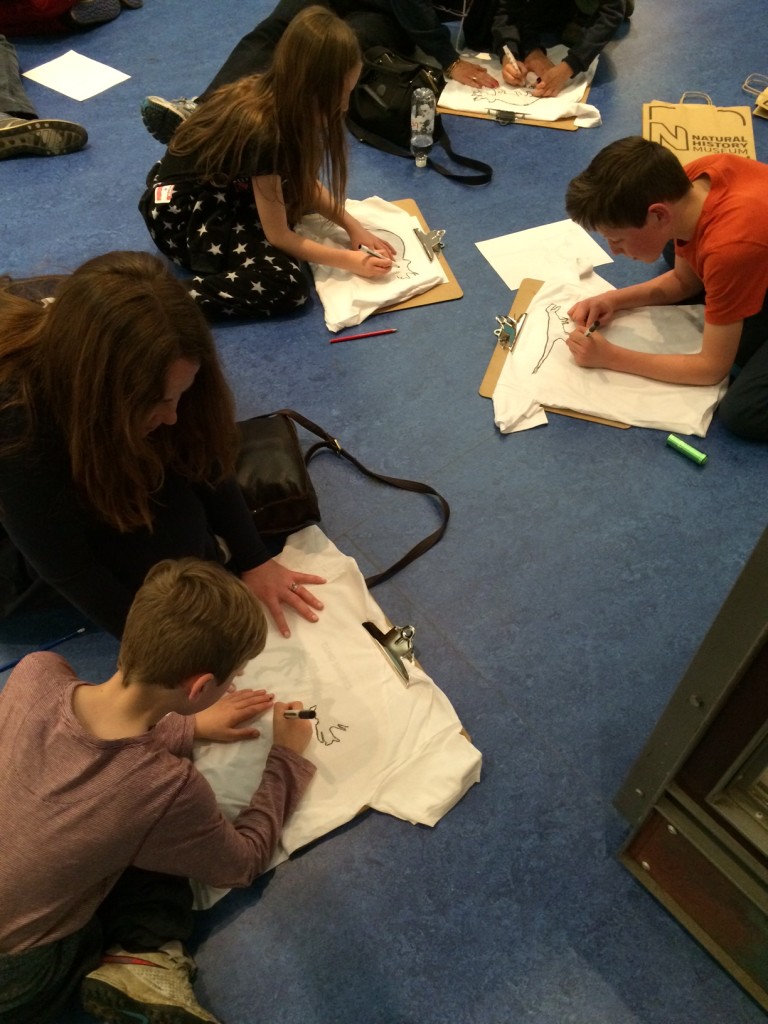 Our final session of the evening was T-shirt design; a subtle way for the kids to think about how dinosaurs are reconstructed using available fossils.

To be honest, the activities were a bit of a side event. The thing we were most excited about (by far!) was just being in the museum after hours and getting the opportunity to sleep on the museum’s floor. Being next to Dippy was a major bonus. With 300 or so bodies to accommodate not everyone got to sleep in the shadow of the museum’s most famous resident. 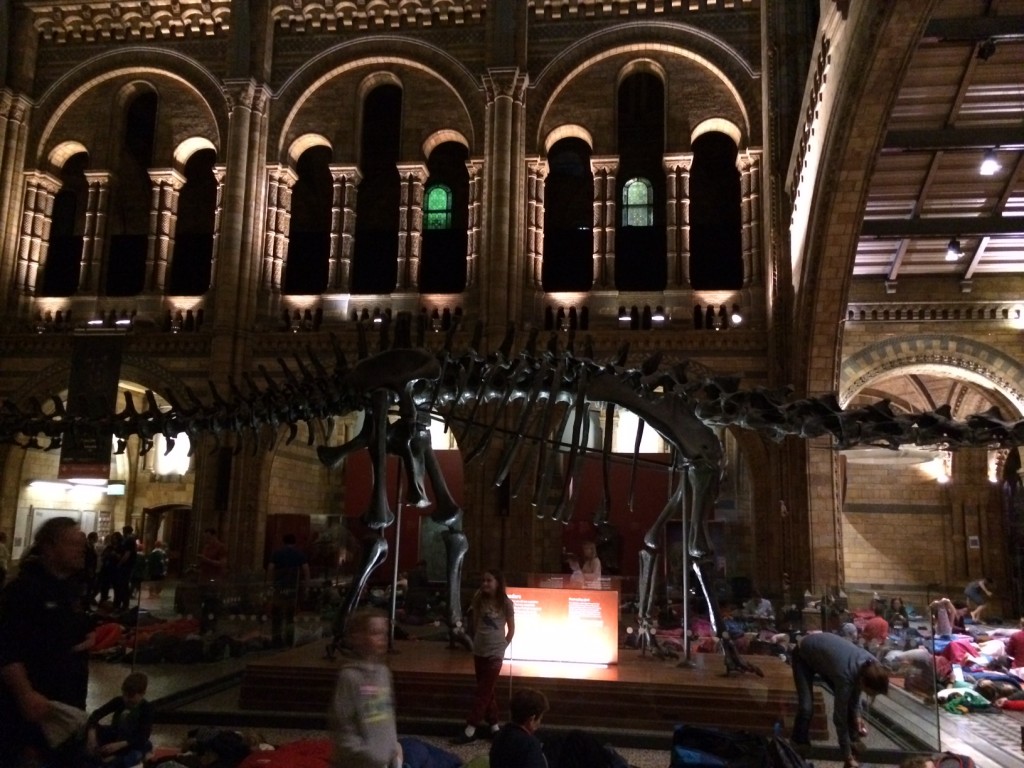 As the lights went down one-by-one, the coughs and sleeping bag ruffles subsided to be replaced by a few distant snores and some loud bangs. Were these the footsteps of the fossils coming to life? If it was then Dippy didn’t give anything away.

All in all we slept pretty soundly. Eyes masks and ear plug definitely helped. And the museum was surprisingly cosy. We had expected to be cold, but were almost too warm.

In the morning we were entertained by the Animal Man. His live animal show was fun and informative and set us up nicely for our visit to London Zoo later that day.

Just like Dippy, who will be replaced by a blue whale next year, our Dinosnores sleepover will be a fond and special memory. Our night at the museum really was a night to remember.