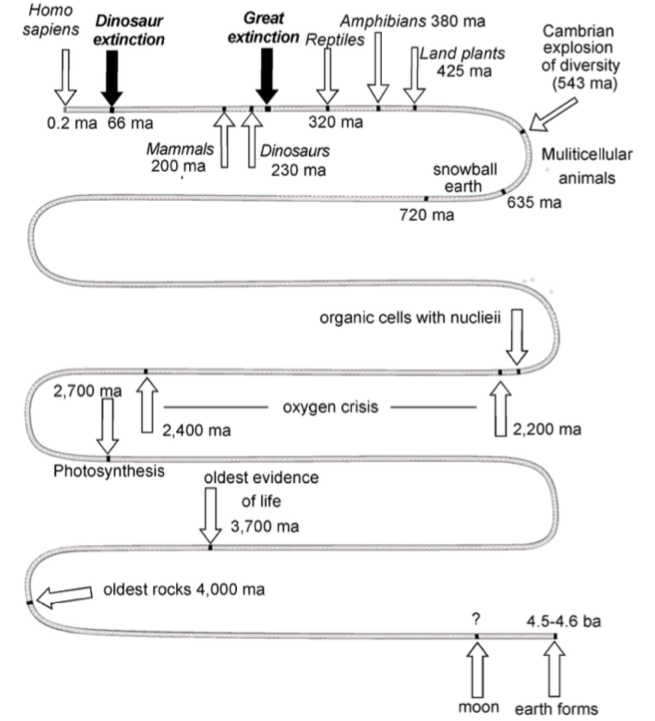 How do you convey a sense of geologic time to the public? One option is to focus on the major events in the evolution our planet and its residents, and hang them on a washing line.

Most nonscientists are familiar with at least some of the major evolutionary events of our plant’s history. Virtually everyone knows about dinosaurs and that they lived a long time ago. But when did they live relative to the history of this planet?

Why not deploy a length of washing line, on which every inch (25.4mm) represents 20 million years and attached paper markers for all the significant events.

The origins of earth

Your washing line will need to be 18 feet, 11.5 inches (577.9cm) long. The first mark to be encountered on the rope denotes the origin of the earth; the oldest known rocks on the planet, from northwestern Canada, are radiometrically dated as 4 billion years old. Prior to that the only record of planet Earth lies in a few mineral grains, some meteorites and a few rocks retrieved from the moon, all of which indicate a similar age for the newly-formed earth of between 4.5 and 4.6 billion years.

This earliest chapter of earth history (called the Hadean Eon) begins with the gravitational coalescing of dust and gases that were orbiting some 90-95 million miles from a newly born star, our sun. Hidden in the chronicles of the earliest earth are the origins of the planet and a collision with a Mars-sized planetoid that blasted huge masses of the nascent Earth into space where they coalesced into our companion satellite, the moon.

Life arose on this planet early in its history. Much debate, however, exists as to when this occurred. Evidence for living organisms in its ancient rocks is mostly in the form of possible mounded microbial mats. To date, the oldest of these lie in sedimentary rocks from Greenland that are considered to be 3.7 billion years old.

At some point in this early history, organisms developed the capability of using sunlight, water, and carbon dioxide to generate their energy. Photosynthesis was a marvelous, unlimited way to provide sustenance for the bacteria, and the only drawback was its byproduct, a noxious gas. The photosynthesizing bacteria adapted to the presence of this poison and continued to generate it as their colonies grew along the shallow waters of the ocean. The toxic gas dissolved in the iron-rich water of the oceans, changing it forever. The gas was, of course, oxygen.

Organisms that could not adapt to its presence perished or sought refuge in places where it was precluded. The vast quantities of iron that were dissolved in the ancient green sea began to precipitate to the ocean floor some 2,400 million years ago, and for 200 million years the seas rusted. As the seas became saturated with oxygen, the gas began to accumulate in the atmosphere. Although atmospheric oxygen on the young earth did not approach the levels of today, it changed forever the nature of life on this planet.

Following the end of the oxygen crisis (taken here to be 2,200 million years ago – 2.79 metres), the earth and it inhabitants settled into a long (nearly 1,500 million years) period of relative stability. Some have referred to this interval as the “Boring Billion”, a reflection on its apparently minimal biologic change. Important innovations did, however, occur during this time, such as the appearance of a nucleated biological cell, which set the stage for further evolution. And the final episodes of this time interval were anything but boring!

About 720 million years ago (91.4cm), the earth underwent a literally chilling event, that many call ‘snowball earth’. Much or all of the globe may have frozen over in several events, and life at times persisted only where volcanic activity provided local warmth. Episodes of widespread glaciation have occurred sporadically in geologic time—we are living in one today. A major chilling of the planet also occurred during the “oxygen crisis”, and evidence of glacial activity occurs at several intervals in the Phanerozoic Era.

When the earth thawed from the last of these icy episodes around 635 million years ago, a new form of life appeared and spread globally. Sandstones of this age from different parts of the world display casts of complex organisms. Referred to as the Ediacaranfauna, some are interpreted as the casts of jellies; others have no known counterpart. The general absence of trace fossils in the same strata implies that the organisms were not motile; some may have been drifting organised mats. The casts probably represent the first significant group of multicellular organisms to exist on the planet. And they disappeared forever from the rock record 541 million years ago in concert with the great explosion of biological diversity.

One of the great geological mysteries is what caused the sudden appearance of most of the major extant life forms in a very short interval of geologic time that drastically changed the nature of life on the planet. Trace fossils indicated a geologically sudden widespread mobility among the fauna, and within a few tens of million years, virtually all of the major groups of organisms extant today appeared in the fossil record.

The origins of this burst of diversity remain speculative, but following it, evolution produced a succession of events on the planet. The first land plants appeared around 425 million years ago (54.6cm), although genetic evidence suggest the possibility of terrestrial plants much earlier. Amphibians departed from a purely aquatic existence 380 million years ago and reptiles arose 320 million years ago, having developed fluid-filled eggs that allowed them to no longer need proximity to lakes or streams for the development of their larvae.

A “Great Extinction” 250 million years ago (30.6cm) killed 96% of all marine species and 70% of terrestrial vertebrate species. The origin of this event remains in dispute; some of the earth’s most massive volcanic eruptions known are to be equivalent in age to the event and commonly held responsible.

Following the impact (and the absence of dinosaurs), mammals radiated across land and sea. About 200,000 years ago – one hundredth of an inch from the end of the rope (0.0254mm) a new mammal appeared on the scene, one that today refers to itself as “Homo sapiens”. Six thousand years ago, this animal began to organise itself into what we today call civilization. On the rope, this would be 0.0003 inches (0.00762mm) from the end, which is significantly less than the thickness of a human hair (0.1mm)!

The washing line quickly demonstrates the history of the earth to nonscientists, convey the antiquity of our planet and the tiny fraction of time we humans have been here.

You could finish this exercise by using the same rope to signify the next 5 billion years. Its far terminus represents the time in the distant future when, according to astronomers, the sun will have consumed its fuel, collapse on itself and in a great explosion, vaporize the inner part of the solar system. Planet Earth is about half way through its existence, and, at this scale, our place in it looks rather insignificant – so long as we don’t bring it to a premature end beforehand!

Two of our projects that may be of interest after reading this article are:

This article is an edited version of one written by Ed Clifton, Geologist Emeritus at the US Geological Survey for the Mar/April 2017 edition of InterpNEWS (a John Verveka & Associates publication).