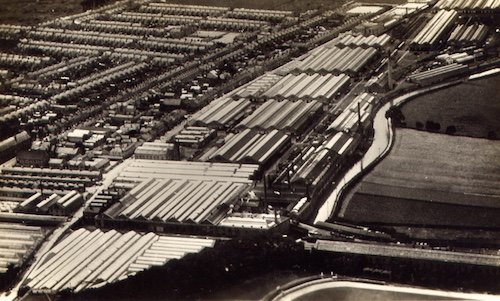 Working with Milton Keynes Living Archive and Wolverton and Greenleys Town Council, Audio Trails have developed a smartphone app based upon their Welcome To…Native app software. The MK Trails: Wolverton app guides visitors and locals around some of the landmarks and histories of Wolverton. Many of these landmarks are tied up with the history of the railways and the history of the country.

The GPS-triggered MK Trails: Wolverton iOS and Android app includes over 20 places of interest around town. Each place is accompanied by archive images and audio interviews from people who have memories of the town stretching back more than a century.

Screenshots from the MK Trails: Wolverton iOS app. More trails across Milton Keynes will be added in the future.

Three town trails have been researched and written for the app. These guide you around some of the quieter districts of early Wolverton and along the footsteps of the railway workers, triggering content as you pass by. A series of plaques act as visual markers on the walls of some of Wolverton’s landmark buildings.

“Audio Trails’ experience with other heritage trails meant it was possible to hit the ground running when the MK Trails Wolverton project started. Their knowledge from previous projects was really helpful. They were responsive to requests for advice and flexible about making changes along the way.”