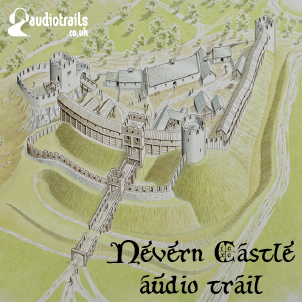 The short and colourful life of Nevern Castle, in the Pembrokeshire Coast National Park, has been brought to life in a new MP3 audio trail for visitors.

During the 12th century, Nevern Castle stuck out like a sore thumb, proudly stamping its authority on the Pembrokeshire landscape.

Today, you’d be forgiven for walking straight past it. The stone and timber defences are nearly all gone, yet entombed in the earth are treasures: fragments of pottery and other artefacts that provide a window into castle life in the 1100s.

The audio trail, produced by Audio Trails on behalf of the Pembrokeshire Coast National Park Authority, features locals, schoolchildren and archaeologists. It provides a guided tour of the remains of one of the earliest Welsh stone castles, built in part by the great Welsh lord, Rhys ap Gruffydd.

Using a map and an MP3 player, visitors can stop at seven marker posts, carved by local carpenter Richard Bennett, to listen to how the site was acquired by Nevern Community Council, how it has been excavated and to get a flavour of 12th century castle life.

Visitors can borrow an MP3 player from Newport Visitor Centre or Castell Henllys Iron Age Fort, or they can download the audio onto their own MP3 player here or the Nevern Castle website www.neverncastle.com.

“Projects like this bring to life the wonders of the past and remind us of our rich cultural heritage here in Pembrokeshire. Before the local community bought the site Nevern Castle was a hidden treasure, rich in wildlife but whose historical significance was unknown to most people.”

“The audio trail really helps to bring the castle to life and is easy to follow; the variety of voices increases the interest. I would like to thank everyone responsible for its production – it’s wonderful.”

Since 2008, a team of archaeologists headed by Dr Chris Caple, of Durham University, has excavated on the site of the castle every summer. The audio trail features David and other volunteer archaeologists explaining some of the important finds.