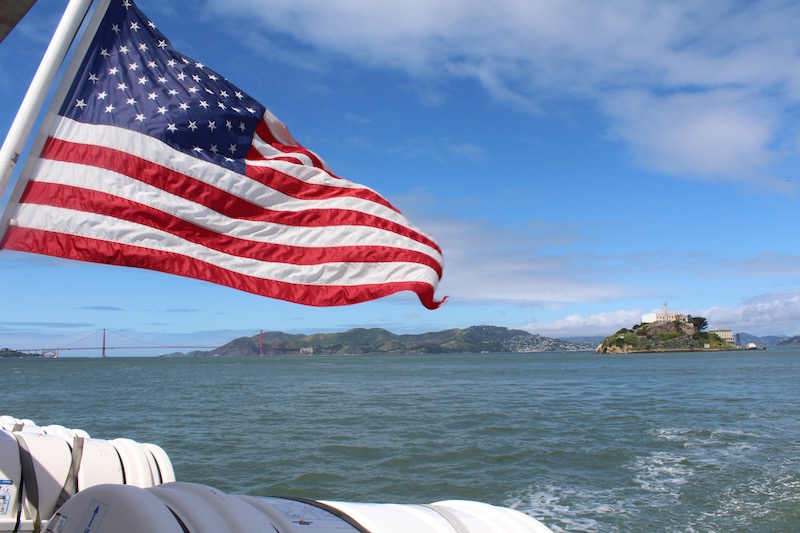 Did the Alcatraz Island cell house audio tour live up to expectations? Yes!

When it comes to audio guides of international significance the cellhouse tour at Alcatraz has to be one of the most talked about. For years it has been on my bucket list and last month I finally got to visit the island where Al Capone and many of the USA’s most hardened criminals were held between 1924 and 1963.

Alcatraz Island is a popular destination for tourists and I made sure I booked tickets well in advance; getting them on the day is nigh on impossible. We opted for the 09.10 trip on the 1.5 mile boat ride across the choppy waters, but still the crowds were big. However, with only the early bird seafarers ahead of us the island had not swelled significantly in population and we were soon taking hold of our hardware.

The cellhouse was everything I had expected it to be: row upon row of small cells set over 2 floors, each fronted with iron bars. Some cells were empty, others contained beds, toilets and even personal possessions. One contains the head of a man made of soap – you’ll have to visit to find out why!

The audio guide begins with an introduction to the narrators: 4 former officers and 4 former inmates. An image of each man, complete with a short bio, are fixed to one of the cells and putting a face to a name is a great opener. We were then guided around the cellhouse and invited to poke our noses into particular cells. Every so often the narrator would divert our attention to an item that we may have otherwise overlooked without lots of additional signage. These insignificant artefacts often related to the best stories!

We then passed through a bulky steel door to nose around an area the prisoners didn’t get to see. Here, we learned about the officers and their families that lived on the island and took in the view of San Francisco and the Golden gate Bridge though the misty skies.

I couldn’t tell you if we’d spent 20 mins or 2 hours doing it as I was really engaged with the experience.

The stories of attempted escapes, murder and friendship flow nicely and the interchange of voices keeps the audio at a great pace. We were told to allow about 45 minutes for the tour. To be honest I couldn’t tell you if we’d spent 20 mins or 2 hours doing it as I was really engaged with the experience. Of course, it is a fantastic story to interpret but the audio tour did not disappoint.

The other positive for me, as an audio guide producer, was that it wasn’t anything different to some of the great oral history trails we have produced over the years. I’d love to get my hands on such a prominent heritage site – one that has changed very little since Al Capone and his cronies rattled their cell doors with metal cups – and weave my magic on such an audio tour.

But hats off to Antenna International for a truly engaging audio guide that lived up to the expectations I had built during my wait to tick off one of my bucket list items.

Take a look at some of the audio tours we have produced. If you’d like to chat about a project then please get in touch.