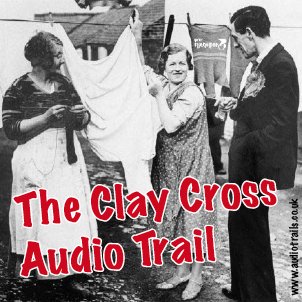 ‘Welcome to Clay Cross’ brings the past to life.

As part of the regeneration scheme in Clay Cross we were commissioned to produce an audio trail that reveals the fascinating story of the town, told by local residents. We also worked with sculptor Peter Maris to interpret his sculptures depicting the history of the town.

Over-sized pepper pots and soap wrappers have played their part in shaping Clay Cross. This audio trail tells that story through 16 local residents who have seen their fair share of change over the years. During this 2 mile trail you will visit the town’s three former picture houses, the colliery rows and the rock from which the town takes its name, plus much more.