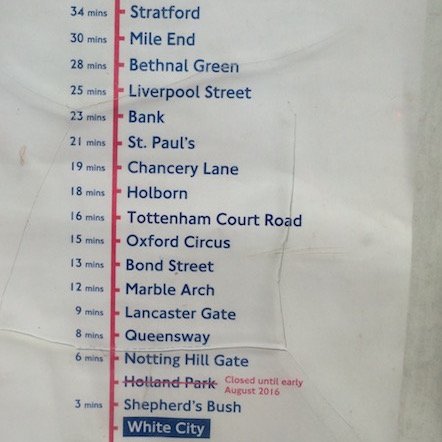 The second in a series of walks following London’s underground. This time it is the Central Line.

In February I walked the line of the Victoria Undergound Line, overground. I’m doing it again, but this time the Central Line will be the inspiration.

So why am I not walking the full line? Firstly, it is 46 miles long in its entirety and reading between the lines, the east and western sections were a bit of a slog for Mark Mason who wrote ‘Walking the Lines’ my inspiration for these walks. Secondly, the reason I am in London is because I have a meeting in Stratford. In fact I have two, so it seems a sensible place to begin, and then head west. Having re-read the Central Line chapter in Walking the Lines, Mason hasn’t included as many fun facts for this line so I’ve … Read More »

Ever wondered what it would be like to follow the London Underground through the streets? It may be a slower form of transport but you get to see a lot more.

After spending two days exploring the vertical layers of geology that south east London has to offer I now find myself on a train to Brixton. Why? I’m going to explore a different cross section of the city. This time a horizontal one from south west to north east; although once again, the geology has played an important role in this walks origin.

Today I am walking the Victoria underground line, overground; through its streets rather than its intended subterranean course. This journey is inspired by a book I picked up in a charity shop last year. Walking the Lines records Mark Mason’s journey walking all of London’s underground lines overground, … Read More »