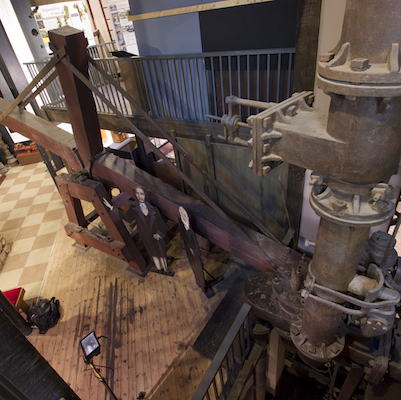 Step back in time and listen to Richard Trevithick explain how his new engine will transform a Peak District lead mine.

In the 1970’s there was great excitement when the Wills Founder Engine was discovered in a lead mineshaft in the field at the back of what is now Winster’s Cemetery.

The story behind Richard Trevithick’s engine, which now takes pride of place in the Peak District Lead Mining Museum at Matlock Bath, has been brought to life.

Audio Trails were commissioned to produce a short piece of audio, set deep down in the mine, featuring an interview between Trevithick and a reporter. As you listen to the audio in the museum, different parts of the water pumping engine are lit up, helping visitors to understand the machine and how it worked.

Working with Audio Trails – Our contact with you was by phone and email.  On each contact your response was very positive by actioning our requests in a prompt and efficient manner to our utmost satisfaction.  We are very pleased with the finished product and would certainly recommend your services in the future, giving you a score of 10 for the excellent service you provided.  Everything was carried within a week of our initial contact.

Where is the Peak District Lead Mining Museum?

The Peak District Lead Mining Museum is in Matlock Bath, Derbyshire, DE4 3NR. It is home to many relics of the lost lead industry. Centre stage is the Wills Founder Engine; watch and listen as Richard Trevithick waxes lyrical about his water pumping machine.

Who was Richard Trevithick?

Richard Trevithick is regarded as the father of the steam locomotive. The Cornish engineer (born 1771) improved the efficiency of existing water pumping steam engines (cutting down on fuel consumption and increasing output) and pioneered the use of high pressure steam. By 1801 he had designed and built the worlds first steam-propelled road locomotive to carry passengers. More…

In 2011 Audio Trails produced a series of audio guides for the Cornish Mining World Heritage Site. Learn about this fascinating bygone industry at audiotrails.co.uk/cornwall-audio-trails.